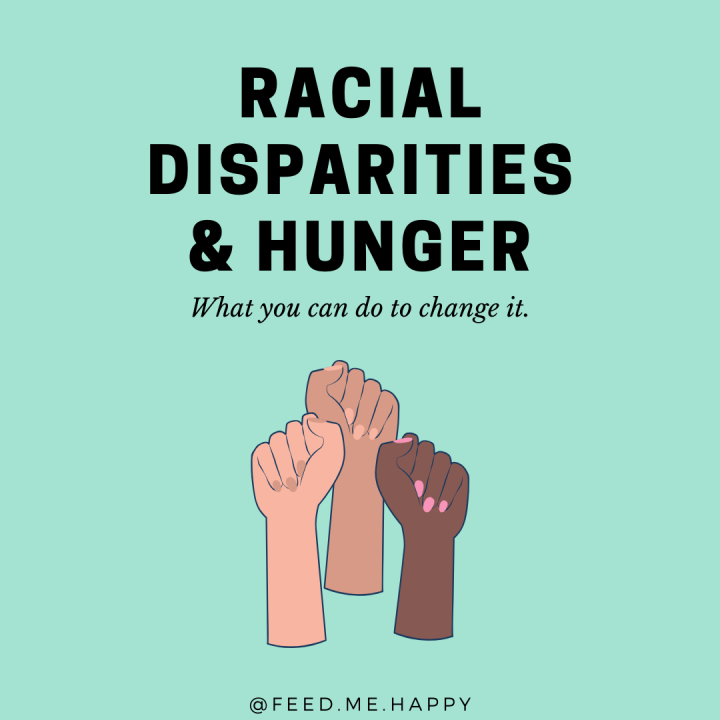 These last couple of weeks have been heavy. They were filled with grief and anger, uncertainty and dismay, but there was also a glimmer of hope for true and lasting change. In fact, change has already taken place or been initiated thanks to everyone who stood up to racial injustice in protest. Those who were uneducated or in the dark took a step back and listened. Melanated voices were amplified, and the symbiotic relationships of teacher and student, friend and ally, were established and strengthened. I personally had a difficult time finding my place in the fight for social justice. I did listen, learn, and will strive to continue educating myself on how to bring about true change and equality in this crazy world we live in. I hope that speaking up and writing this article now is a beginning point for my small contribution.

It is well-known that minorities are disproportionately affected by poverty and hunger, specifically African Americans, Blacks, Latinos, Hispanics, and Native Americans. Of course, all ethnicities have outliers and exceptions, but a large portion of food insecurity is seen within these minority communities. I learned more about this topic during my nutrition education and when researching food insecurity on college campuses. My peers and I noticed a troubling and common theme- there are apparent risk factors regarding hunger as a college student -being a minority, first-generation student, and coming from a low-income household. Instead of being rewarded for pursuing higher education, these at-risk populations are directly plagued with chronic hunger. But how can race be a predetermining factor for food insecurity and hunger?

According to the USDA, 22.5% of African American households and 18.5% of Hispanic households are food insecure, both of which are higher than the national average of 12.3%.

Racial inequality has been discussed very openly recently. As a result, the mass population is learning that socioeconomic status, education level, healthcare access, and one’s neighborhood can greatly impact a person (and their family’s) health- all of which minorities have had a more difficult time acquiring higher levels of. If a student comes from a low-income family who doesn’t qualify for government assistance, he or she may be left with the decision of paying for books or feeding him or herself. NO ONE should have to choose between education and a full stomach. Why are individuals even being presented with this choice to make?

Our system is broken.

If you’re ever searching for a documentary on food insecurity, I suggest you check out A Place at the Table, featuring Jeff Bridges. It is available for rent or purchase on Amazon, YouTube, or iTunes. The food doc tells the stories of different families in America and how they struggle to keep food on the table. Each family is of a different race, and while they are all heartbreaking, the journey that stood out to me was of a young black, single mother who struggled to feed herself and her two children. She was unemployed at first and receiving government assistance, but here’s the part that most people don’t see- she eventually got hired at a food alliance to help others who didn’t know where their next meal was coming from. When she obtained the job,  her government assistance was immediately revoked,. With no savings, she struggled even more to keep her head afloat and feed her children, even with a job. So why would she hustle and work to only struggle MORE than when she wasn’t working and on food assistance? Our system is broken and needs to be fixed.

I saw this quote earlier- “A system cannot fail those it was never meant to protect”. So is saying “the system is broken” incorrect since the system was never whole and fully functioning to begin with? Leave your thoughts below.

“1 out of 2 children in the United States, at some point, will be on food assistance”.

This statement alone is startling. How can 1 out of 2 children be hungry when everyone around us seems fine? For one, hunger does not discriminate. Hunger doesn’t care what race you are, what education level you have, or where you live. Who does care to discriminate against you is the government, who dictates who can afford food through mass production of obesity-causing processed foods offered at a cheaper price compared to organic foods that are unaffordable and inaccessible to many. We must collectively stand up to our government officials and petition for change. We must educate ourselves, each other, plant and grow gardens together, support local farmer’s markets and farms, and get back to our “roots” of real food and health.

And if that’s not bad enough…

As The Alliance to End Hunger points out, “Schools with 90% white students spend $733 more per student than schools with 90% or more students of color.” This is data and statistical evidence that discrimination is effecting children of color in schools. It breaks my heart, and I can’t even fathom how the allocation of funds isn’t equally distributed to feed all children, especially children in need. If children aren’t fed properly, they cannot effectively think, learn and retain information in school. Our brains need sufficient food and nutrients to function optimally! Heck, many of these kids have trouble staying awake in class. This has to change.

Government programs, such as the SBP (School Breakfast Program) and SLP (School Lunch Program), have been in place since the late 60s. Fun Fact: The SBP was first organized and founded by members of the Black Panthers! It was so successful that the two-year pilot program kept being extended and still exists today. So why is food insecurity and hunger on the rise in America with these programs in place?

While charity and government assistance programs help, they are only a temporary fix instead of a solution. The underlying problem is that the cost of healthy food is too steep and inaccessible while processed foods that cause chronic disease are cheap and readily available. See the chart below.

What can we do?

How can we advocate for minority populations who are food insecure when our system sets them up to fail? The best I and other food justice fighters can do is educate ourselves, write our local, state, and federal government officials, and petition to change these laws that favor mega corporations and revenue streams over human health and food equity. When I speak of food equity, I am referring to everyone having access to an assortment of affordable and nutritious food. This is food security. Food insecurity is the opposite- NOT having easy access to affordable and nutritious foods. Many low-income areas are considered food deserts because they don’t have grocers that carry fresh produce. This is a major problem. Food and health is a BASIC HUMAN NEED AND RIGHT! This will have to be a whole other blog post because I am also very passionate about food deserts and the need to eradicate them in this country.

Other ways to help.

Please feel free to contribute to this ongoing discussion of racial disparities and food injustice. I am very passionate about the topic and am open to your thoughts.